The Search Is On!  Ya'll ready for this.

In pursuit of the facts, I have been known to pick people's brains; visit cemeteries; call total strangers in the US and overseas; request DNA samples; travel back roads with cousins; run from stray cows; collect library cards, books and papers; spend days reading records; study new and old maps; read historical highway markers; publish websites; and ask many questions in pursuit of family history.

What a shock! Jacob Prillaman signed his will as Jacob Brüllmann.  The Sowder family had shared previously that Jacob had signed his name as Jacob Brüllmann on his daughter Anna's marriage bond.  You can find a photocopy of the bond on microfilm at the Franklin County, Virginia courthouse.  I went to the courthouse to look at that record and view this signature. While there, I decided to look at the will as transcribed by the clerk of the court from the original document.  I had read the will over and over again in the Prillaman book and had never thought to question the transcription.  But....upon seeing his signature shown as Jacob Brüllmann, I was surprised to think we were still asking the question about the origin of the Prillaman surname when the answer had been there in front of us all along for over 200 years.  That summer, inspired by reading Trace Your Roots with DNA by Megan Smolenyak and with a few volunteers to get us started, the Prillaman DNA project began through Family Tree DNA.  Could we make a connection between the YDNA of the Prillaman family in America and the YDNA of the Brüllmann family in Switzerland?

Exciting year - YES, WE MATCH! The American Prillaman surname closely matches the Swiss Brüllmann surname. A huge thanks to the male DNA volunteers who made it possible. Our haplotree is known as R1b1a2a1a1b3c or R-L2 and is found fairly frequently in Switzerland.  Out of seven project members, we have five descendants from Daniel's line (third son of Jacob) and two from John's line (second son of Jacob) to compare to the Swiss line. We have 35 out of 37 markers that match between one of the descendants of Daniel and our Swiss cousin (a mismatch of only two). As seen below, 34 out of 37 markers match between three other descendants and the Swiss line; and 33 out of 37 match between one Prillaman and the Swiss line.  Ya'll ready for this - we have Swiss ancestry and our original surname is Brüllmann.

Based on the book entry given to me by Norris Prillaman Miller, I had been searching passenger lists for the year 1747 for a Jacob Brüllmann but was unable to locate that name.  Several transcriptions of passenger lists are available online with the closest match for 1747 being a Hans Jacob Grüllmann on the ship Lydia transcribed from A Collection of Upwards of Thirty Thousand Names of German, Swiss, Dutch, French and other Immigrants in Pennsylvania From 1727 to 1776 by Daniel Rupp.  I had read that some researchers had found errors in Mr. Rupp's transcriptions of German handwriting.  The Pennsylavania German Society had published three volumes of the ships records with Volume II containing tracings of the actual signatures from List "C", the Oath of Abjuration for the ship Lydia.  If I was going to find out if Hans Jacob Grüllmann was "our" Jacob Brüllmann I needed to find that book. A trip to New York City was coming up and I decided to stop at the NY Public Library to look in Volume II.  I brought my copy of Jacob's signature and turned to page 390.  Pretty exciting - the signature on the ship's list matched the signature of Jacob Brüllmann in the Franklin County, Virginia records.  This was a great day in the pursuit of Prillaman history (and I must say it included a little silent cheering and dancing for joy in the library).  Woo-hoo!  Jacob, we found you.  For the second time, our family has been rewarded by checking an original source.  I believe the transcription by Daniel Rupp for the Lydia in 1747 to be inaccurate; it is not Hans Jacob Grüllmann but Hans Jacob Brüllmann.

I attended the Prillaman Reunion in Franklin County, Virginia in 1999 and was surprised to hear one of the officers of the reunion mention that the Black Prillamans had also recently held a reunion in the area. Luckily, I was able to connect with one of the organizers of that reunion.  As one of the primary researchers of her family history, she shared the stories of her ancestors Franklin and Charlotte Prillerman. Charlotte's mother was called Granny Nancy by the Prillerman family.  She was brought to Virginia from Nigeria and enslaved by Jacob Prillaman III (1778-1858) and his wife Nancy Lucy Snidow in the Blackwater area of Franklin County near Jamison Mill.  From her mother's stories, Charlotte grew up knowing that her enslaver was also her father.  Around 1829, Charlotte and Franklin Prillerman began raising a family of seventeen children; ten girls and seven boys.  Charlotte's youngest son Byrd Prillerman often shared his family history and the connection to the Prillaman family in his published biographies while serving as president of what is now West Virginia State University.  Jacob Prillaman III owned a blacksmith shop where Franklin learned the trade and was at times sent off to work as a blacksmith in the Salt Mines of the Kanawha Valley. After being freed, Granny Nancy, her daughter Charlotte and son-in-law Franklin, moved to Patrick County, VA where they were in closer proximity to some of the couple's children and their growing families. In the spring of 1868, several in the family walked the 250 miles to Kanawha County, WV, eventually settling near Sissonville. Franklin died on January 7, 1872, in Kanawha and is buried there.  Autosomal DNA testing confirms the relationship between the Prillerman descendants of Charlotte and the Prillaman descendants of Jacob III.

Although we have many records of Jacob Prillaman/Brüllmann in Virginia beginning around 1772, we have little information about his whereabouts between his arrival in the colonies in 1747 and his move to Virginia some twenty years later. The Prillaman book states that Jacob sold land in Maryland in 1763 in anticipation of his move to Virginia.  He actually subleased the land as a tenant - he did not own it. The land belonged to Lord Baltimore and was part of his Conococheague Manor (Maryland Records, Brumbaugh). I asked for clarification on the record and received a reply from genealogist and author Paul Drake as shown below. 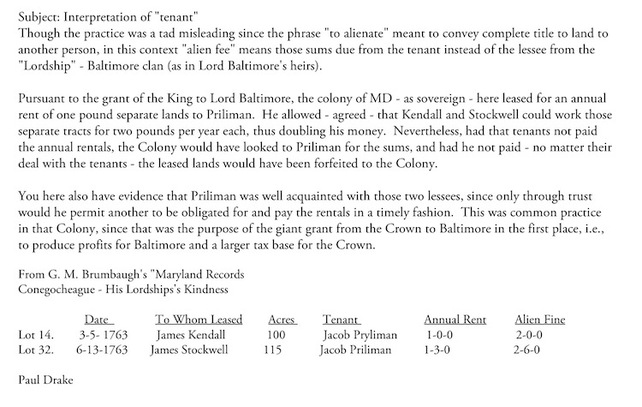 On my way to Virginia from New York for the annual Prillaman Reunion in 2010, I visited the Washington County Historical Society in Hagerstown, Maryland to find out more about Conococheague Manor and to look for other records on the Prillaman family there.  I found an article in Catoctin History Magazine mentioning an inventory of Lord Baltimore's land but not the actual inventory which may include information on Jacob Prillaman's acreage and dwelling in Conococheague Manor. On the way back home from the reunion, I got off of 81 and drove through Williamsport, Maryland, a part of Conocoheague Manor in colonial days, to view the area and imagine where Jacob and his family may have lived, farmed, and worshiped. 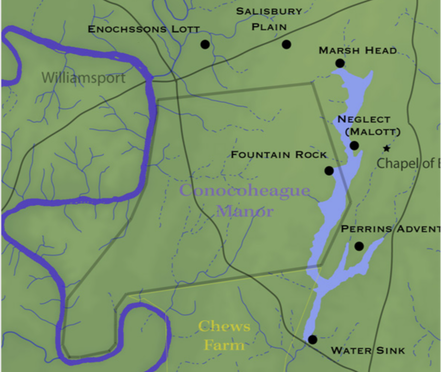 The Prillaman family history book doesn't have as much information on Jacob Prillaman Jr., first son of Jacob Sr. as it does on some of his siblings.  No one is quite sure where he is buried but what we do know is that sometime in the early 1800's, he left Franklin County, Virginia with his 2nd wife Sarah Bradley and many of his children, and settled in Miami County, Ohio.  A powder-mill erected by Jacob Prillman, on Indian Creek, in 1806, is said to be the first manufacturing establishment established in Elizabeth township.  He is the only one of Jacob Sr. sons recorded as a Revolutionary War veteran.

We had passed through Miami County, Ohio on other travels west and I always thought of him as we drove along.  On this 2012 return journey, I was prepared and when we were about 30 miles away, I told my husband, "We have to stop at the courthouse."  He's gotten used to this kind of thing and needing to stretch his legs a bit, he agreed to make the needed turns and got us there in no time.  I made my way inside and filled out the necessary paperwork.  The clerk headed to the vault and returned with a brown envelope.  Inside were several original handwritten documents from the early 1800's signed by Jacob Jr.  A few snapshots with the iPhone and we were on the road again (hopefully heading on to further genealogical adventures). 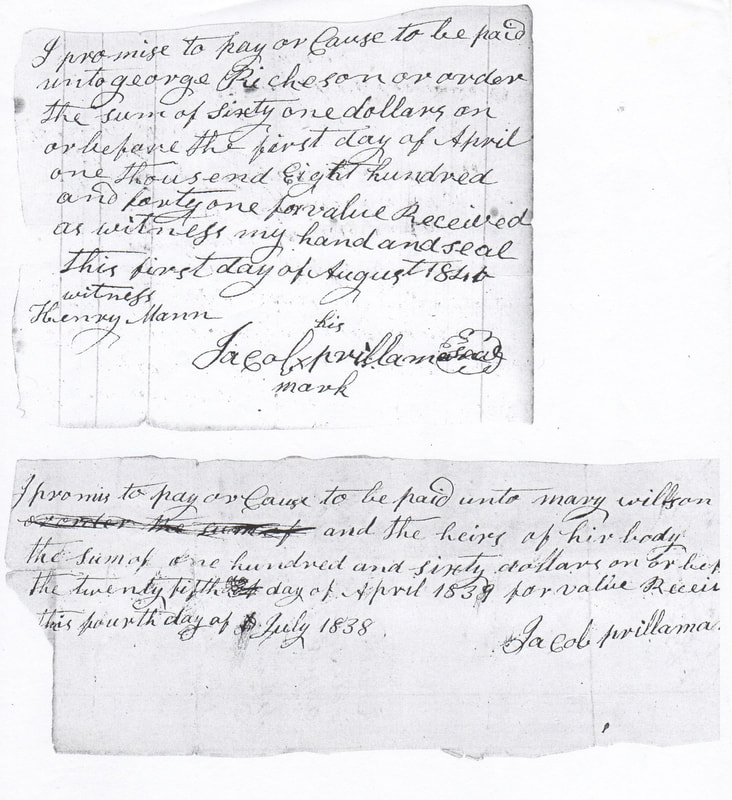 Through email correspondence and telephone calls with Maryland researchers in Washington County, Maryland, I finally received a transcription of the Inventory of Conococheague Manor.  As the transcriber was not familiar with the Prillaman surname, you can see that they deciphered the spelling quite differently on lots 14 and 32 than the Brumbaugh Maryland Records. However, what makes this a wonderful find despite the transcription, is the description of two dwelling houses made with round logs, a stable, out buildings, an apple orchard, and springs in the surrounding landscape ascribed to Jacob Prillaman, information not included in Brumbaugh's records. Persistence and patience pays off in genealogy research and later that year, I received a photocopy of the handwritten inventory of Conococheague Manor in a large envelope presented to me by the US postal service.  The cursive from 1767 is much harder to read than the transcription from 2002 and after seeing the manuscript you can understand the problems deciphering the letters. The other amazing part of the story - Lord Baltimore's original inventory manuscript arrived from Canada - you never know where you might find something related to the Prillaman family.

2013 - Journey Abroad - the Swiss origins of the Brüllmann family 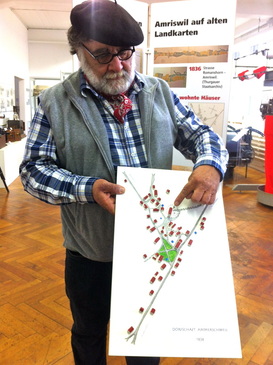 In June of 2013, I journeyed with two of my sisters to Italy and Switzerland.  After communicating long distance via email and phone with our Swiss Brüllmann YDNA cousin since 2004, we were finally able to meet him and his family in person.  We spent two days in and around the Canton of Thurgau and near St. Gallen where the Brüllmann and Brühlmann surnames originated.  Our cousin arranged for a private tour of the historical museum in the village of Amriswil. What an amazing experience. In the photo on the left, our tour guide Herr Burkhart, is pointing to an area near the village of Amriswil where Brüllmann's and Brühlmann's farmed.  Herr Burkhart was informative, entertaining, humorous, and generous.  He supplied several documents (in Swiss German) documenting the origin of our surnames. Through his research before our arrival, he believes the two surnames, Brüllmann and Brühlmann represent the same families with Brüllmann being the older spelling and Brühlmann a more contemporary spelling.  As shown below, the village of Amriswil has been around since 799, though with different spellings of the village name over the years. Imagine our excitement when Herr Burkhart supplied us with a picture of our family crest.  Someday I hope to return to Switzerland and visit Lohn in the Canton of Schaffhausen. 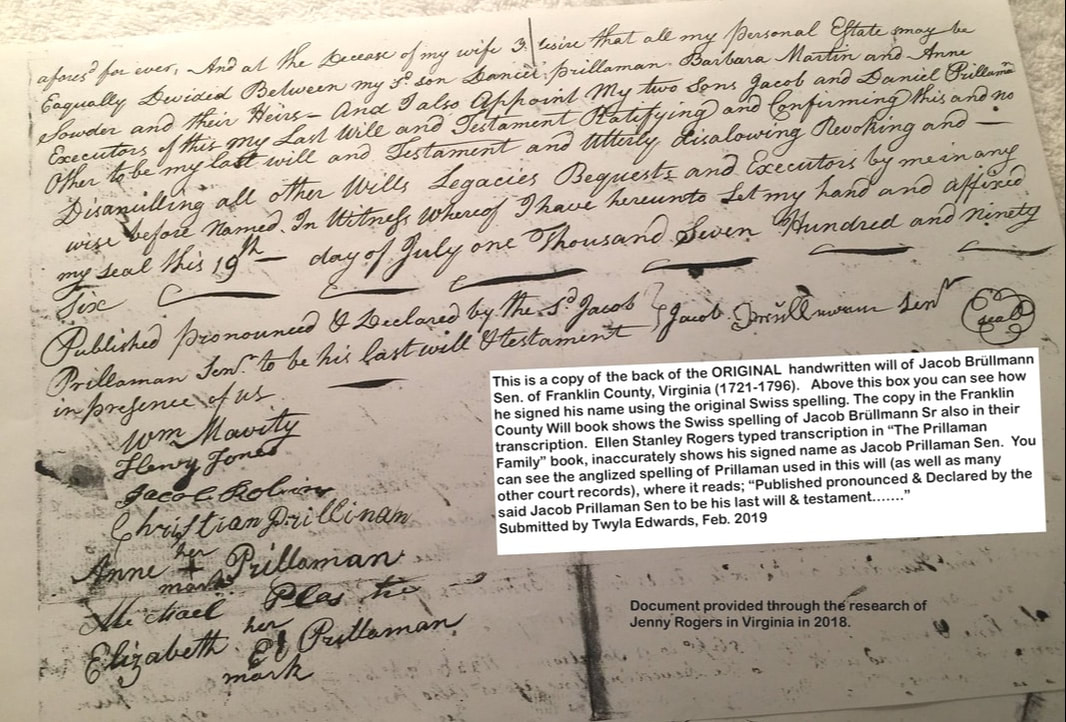